A History of the San Joaquin County Resource Conservation District

Research and writing by: Bonnie McInturf
Edited by the San Joaquin County Resource Conservation District
With Special Thanks to Mario Milani, NRCS

If we are bold in our thinking, courageous in accepting new ideas, and willing to work with instead of against our land, we shall find in conservation farming an avenue to the greatest food production the world has ever known – not only for the war, but for the peace that is to follow.
– Hugh Hammond Bennett,” Father of Soil Conservation”, 1943 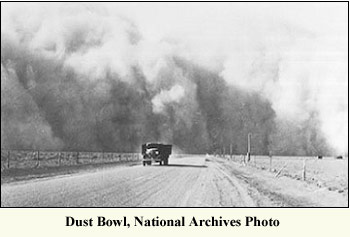 Dust storms had always been a constant threat, especially in the Midwest, and it was well-known that erosion of the topsoil could decrease a farm’s productivity. By the early 1930’s, the soil of the southern Great Plains had become powder-dry due to a combination of overgrazing, a 7-year drought and the removal of native grasses to plant wheat. The addition of wind to this mix completed the recipe for disaster. The first major wind storm in 1934 swept away nearly 350 million tons of topsoil. Windstorms continued stripping away the dry soils through 1938, damaging nearly 100 million acres of farmland forcing many to leave the Great Plains for the West. Once viewed as simply beneficial, conservation was now seen as a necessity upon which the economy and the nation’s welfare depended.

The economic devastation caused by the Dust Bowl prompted the federal government to declare the erosion problem a menace to the national welfare and establish the Soil Conservation Service (SCS) in 1935 . The primary mission of the SCS was to assist farmers in reducing erosion and protecting soil. Soon after the formation of the SCS, came the establishment of Soil Conservation Districts (SCDs). Formed in 1938, to respond quickly to local needs, SCDs were controlled by local boards of directors, and were empowered to manage soil and water resources for the purpose of conservation. In 1971, SCDs were given the additional responsibility of assisting in the conservation of “related resources” in addition to soil and water and were renamed Resource Conservation Districts, or RCDs. Today, there are approximately 3,000 conservation districts throughout the United States referred to by several names under different state laws:

The Stockton Soil Conservation Service opened its doors in 1954 in response to the Flood Protection and Prevention Act of 1954. This Act authorized the Secretary of Agriculture to work with state and local agencies to plan and implement projects conserving the nation’s soils. To assist in this endeavor, the first of seven Soil Conservation Districts (later Resource Conservation Districts) was formed in San Joaquin County in 1956. Here is the story of a few of the county’s original conservation districts (please refer to the map below for locations of each former district). 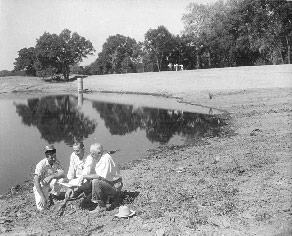 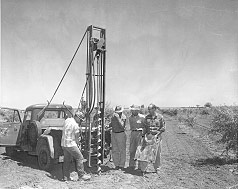 Water table level investigations are being made by the directors and SCS engineers preliminary to the development of specifications for placing of tile drains. Cooperators have installed about 3 miles of tile drains in 1959.

(4) 1956 – Tracy Soil Conservation District
Formed in response to farmland flooding from Corral Hollow Creek in 1955, the Tracy SCD was instrumental in the formation of the Corral Hollow Creek Flood Control Zone by San Joaquin County. Tracy SCD also facilitated the Jerusalem Drainage Project which installed a 31-mile pipe collector system to provide a drainage outlet for flooded farmland. This project saved 12,300 acres of orchards and other crops from the damage that would have resulted from a high water table. The Tracy SCD also was responsible for irrigation improvements on farmland within its boundaries.Some of Early Names from the Tracy Soil Conservation District: Arthur P. King (President), John O. Paulson, John C.Currier, Manuel R. Furtado, Ernest J. Pombo 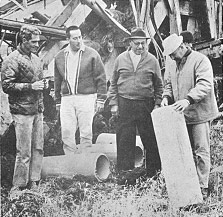 A drainage tilting project is being completed in a field bordering the west side of Patterson Pass Road. Some 6,400 feet of six-, eight- and 10-inch pipe is being laid in a 160-acre field farmed by Tony Furtado and Manuel Costa and a 100-acre field owned by Mary Brown and farmed by Bob Patterson. The pipe, laid in a sleeve of gravel will carry water from the high water table field to a West Side Irrigation District drainage ditch east of Patterson Pass Road. Shown at the tiling operation, left to right: Ike McElvaney, contractor from El Centro; Bob Stroud, engineer with the U.S. Soil Conservation Service; Manuel Furtado, president of the Byron-Bethany Irrigation District and director of the Tracy Soil Conservation District; and Mario Milani, soil conservation engineer. Tracy Press Photo.

(7) Walthall Soil Conservation District
Eldrid Brown spearheaded the formation of this district, which formed in 1957. It was southwest of Manteca along the east side of the San Joaquin River. The main challenge it faced was flooding along Walthall Sough from the San Joaquin River. It also provided assistance to farmers in the form of land leveling to improve water distribution and the improvement of irrigation systems. Some Early Walthall Directors: Fred Picchi (President), Emil Filippini, Thomas Kell, Charles W. Hunt, Joe Vieira, Ralph Burson